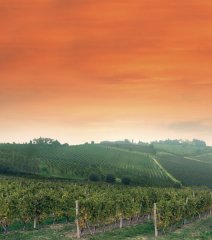 The history of Facchino wine-makers started in 1958, when the founder Giorgio Facchino – today awarded with the title of “Cavaliere del Lavoro” – decided that at the age of 33 it was time to leave the province of Benevento with his wife Rosaria in order to allow his three children to receive a better education. At that time agriculture in Piedmont offered better chances than in Campania; in February ’58, grandpa Giorgio arrived in Rocca looking for a farmhouse meeting his needs and he suddenly fell in love with the one called “Val del Prato”. He was impressed by the mild hills, the 7.5 Ha vineyards, the tufaceous soil, the already renowned quality production and the excellent exposure.
This very last characteristic was crucial in his choice because Giorgio

noticed that in that winter the snow on the hills of Valle del Prato had already melted, while the other hills exposed to north were still covered with snow.
A few months later, the Facchinos moved to Piedmont, where grandpa Giorgio started running the business as sharecropper. Of course, according to sharecropping rules, half the harvest was supposed to be given to the owners of the farm; however, the Facchinos made their first wine using the residual part of the harvested grapes. Fourteen years after their arrival in Piedmont, Giorgio, Rosaria and their already adult sons (Pellegrino, Carmine and Antonio) bought another farm called Cascina Luvi, which was 6 km far from Rocca Grimalda, in the municipality of Trisobbio.

In 1977, in this new farm, they built a cattle shed, currently hosting about 110 heads of Piedmontese breed cattle; the animals were fed with the corn and the wheat grown on the fields of the farm.
In 1980, the owner of Valle del Prato, Riccardo Faini, decided to sell the farm

and the Facchinos seized the opportunity and bought it. Between 1982 and 1983, the historic and close farm called Tenuta Cannona, owned by the Organization for the Agricultural Development of Piedmont (Ente per lo Sviluppo Agricolo del Piemonte, or ESAP) started the  apportionment and the sale of the lands, some of them bordering Valle del Prato. Thus, the Facchinos bought some more lands – about 16 Ha; a part of such lands had originally belonged to Valle del Prato, but they had been later transferred to ESAP. Thanks to this, Valle del Prato was set up again and consisted of 23.5 Ha of lands.

In 1985 and 1986, excepting a few “historic” vineyards, all the plants were renewed; in 1989 and 1990 a new farmhouse and the present facilities of the cellars were built on the top of a hill.

In 1997 the Facchino Brothers gave birth to a holiday farm and opened a store for the sale of meat. Today, the Facchino Wine-Making Company is run by Carmine who – supported by his family – is committed in the work started 50 years ago with many sacrifices with his brothers and his parents.
This is the history of our wine-making company, a jewel in this land still to be discovered.

Our cellars are open every day of the year forvisits and guided tastings BY APPOINTMENT both for groups and individuals. For further details, contact us at +39014385401 or send an e-mail to: .